Today I'm back with a now familiar picture of the Fanatik 1, this time with the major parts labeled. 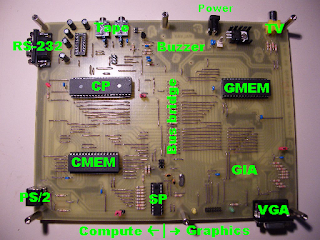 Let's start with the CP (Central Processor). This is an Atmel AVR microcontroller, specifically ATMega162. This chip acts as the CPU, having access to the system's memory and some of the peripherals.

There are two SRAM memory chips called CMEM and GMEM, CMEM is primarily used for computing, while GMEM holds the video frame buffer.

Fanatik has two analog video outputs, VGA and TV (cinch). These video signals are generated by the GIA (Graphics and Interconnect Array). This is a Xilinx XC9572 CPLD (programmable logic device). The D/A converters are made solely from discrete resistors.

The SP (Supplementary Processor) serves as a clock generator and PS/2 keyboard controller. It can communicate with the CP via three dedicated lines plus over the eight (shared) bus data lines.

The CP is also connected to the RS-232 interface (serial port), the buzzer/speaker output and the tape in/out ports ('mic' and 'ear'). Power (9-12 Volts DC) is provided via a standard DC power connector.

The compute part and the graphics part each have its own bus. These are coupled by the passive bus bridge (array of resistors). This allows the two buses to function independently or as one single bus, as needed.

As you can see the Fanatik relies heavily on programmable hardware. As both the AVR MCUs and the Xilinx CPLDs are in-system-programmable, I can re-program them without unplugging them from the board :-).

Hope you liked today's quick walk-through. Obviously I skipped a lot of details, but you can already see that the Fanatik is a pretty cool device with a decent range of I/O capabilities.

(This time hopefully simpler.) Try a quick guess at the basic specs of the F-1. Namely try to guess the clock speed, RAM capacity and number of colors supported by the video outputs. Don't try to look it up, just give me the first number that comes to your head. Don't be shy! ;-)

Till next time!
Posted by Jiří Svoboda at 6:57 AM