Many of you already know I've been busy with a 'top secret' electronics project. Especially Jakub has been nagging me to reveal something. Today I can share with you this photo of some mysterious tests that I've been performing. The results were satisfactory. That's all I will say for now. Mwahahaha!

For those less versed in electronics let me describe the action for you. What you see in the picture are three joined-up breadboards. On the breadboards we see some DIL ICs plus a bunch of wires and other stuff. The thing on the middle breadboard is a surface-mounted IC soldered to a home-made PCB which has pins on the bottom side and allows one to plug the chip into the breadboard. 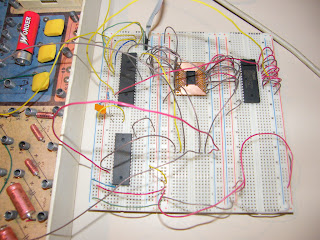 Posted by Jiří Svoboda at 9:13 AM No comments: